composed and produced by Burnt Friedman
distributed by Hard Wax

A  Masque
B  Peluche

“We are not sportsmen in our categories, rather amateurs more likely to conclude on the right wrong tone, maybe never. Where music enjoys itself, where it does not require attention, yet is attentive to itself. Where nature enjoys itself – not being watched. Sportsmen arrive at the “Mount Everest of chamber music”. How do they hear when up on a mountain ? Tone shooting on one leg, motion temporarily paused, “afraid in a world they never made.”” (B.Friedman, info)

“The production and Zen-mischief ego-death of the groove take you somewhere nobody else can. “ (WIRE)

“Each track is built around a single beat-loop, embellished with very light dub processing. “Masque” is the more understated of the two, its hi-hats ultra-crisp and lilting, its kick drum sounding sharply at the start of the bar. Scraps of chord and melody are fleetingly visible in the background, like wisps of cloud against a clear sky. “Peluche” is a bolder take on a similar idea. A 5/4 time signature enhances the feeling of balanced asymmetry, and the beat is pitted with all kinds of live-sounding percussion hits. Every couple of minutes, puffs of reverb coalesce into a dense fog, and in the second half the whole thing picks up a loping, implacable pace. It’s a strange groove, but in Friedman’s hands it feels like the most natural thing in the world.” Resident Advisor 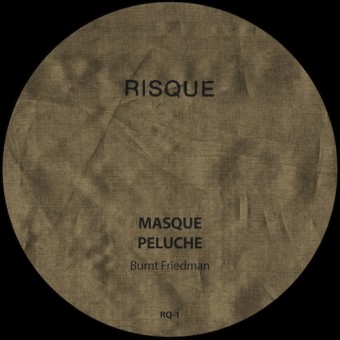