released on CD and LP, 2004/ “Braun (brown) attempt to do for light brown what Eminem did for white.”(NME)

Braun´s third album also contains elements of House Music and Rhythm and Blues, sliced up into fragments of real horns, double bass, piano, accordion, claps and freakish vocals nuzzling up the toaster, the crotch in one hand, the microphone in the other. It is a record characterised by unsettling off kilter pacing and a fearless approach to ridicule hip-hop codes. In a spasmodic jerky kind of way Braun brings the F— back.
“Braun released 2 albums under the name Beige, one on the Leaf label in 2000, U.K. and “I Don´t Either” on Nonplace in 2001. He changed the artist name from Beige to Braun (And The Mob) also because the new record is not a one man show anymore. The artwork of “as the veneer of dumbness starts to fade” refers to Mark Stewart’s “As The Veneer Of Democracy Starts To Fade” (On-U sound). “It was “the” album of my life” states Braun, also listening to some Adrian Sherwood remixes/productions at this time. He was irritated: “It sounds like to much dust on a sliding record needle I really thought “there’s something wrong” and I liked it, so I bought the Stewart album – and then I was absolutely sure thereÂ´s something wrong and I liked it much more, I really enjoyed this feeling of “there’ssomething wrong” until today it’s a key-point of my work – and it’s my reference when I’m listening to music.” (excerpt from interview with Fader Magazine, Tokyo 2004)
“If you locked George Clinton, James Brown and a couple of hyperactive kids in a room with an equivalent number of Casios and a primitive sampler, they might come up with something along these skewed lines.”(The Wire 2002)
“I would even go as far to say that this has got the funk.”(BigDada) 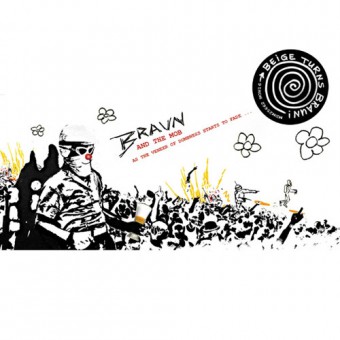