With “Skies Okay Blue” Nonplace offers two pared-down vocal tracks that place subtle and unexpected rhythms alongside the manifest regularity of electronic dance music.
Measuring in at DJ-friendly 122 to 128 bpm, the seemingly straightforward grooves turn out, on closer listening, to be intertwined with uneven beats: 12 in the case of A1, 5 in the case of B1. These beats, ubiquitously and erroneously described as “polyrhythms”, are based merely on the combination of the always unalterable even metre – in this case bass drum and hi-hat – with superimposed, actually formative, rhythms recognizable by a cycle of sequences, melody, bass or percussion, etc.

Extra-long versions of both tracks were mixed for this 45rpm super-sound EP. The third track, “Silberne Libelle”, is a 2-minute sound poem featuring Friedman-typical xenophile instrumentation. All three tracks are exclusive to this vinyl edition.

The voice of Daniel Dodd-Ellis, a Berlin-based performer and vocalist, was first heard on Burnt Friedman’s 2007 album First Night Forever (non22). The lyrics stem from both artists and were cut-up and re-assembled several times over by Friedman during production in 2013 and 2014. The line “Skies are blue inside of you” comes from Aldous Huxley’s novel Brave New World, which appeared in 1932. 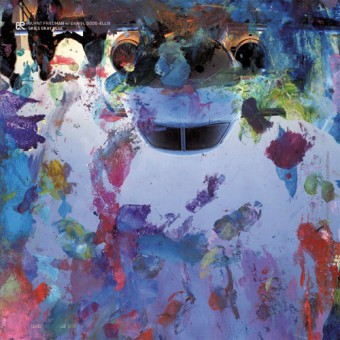