“The Embassadors created an earthbound spacewalk with Healing the Music. Led by the emotional vocals of Michel Ongaru, who transcribed Embassadors architect Hayden Chisholm’s English lyrics into sung Swahili, the group’s tracks, like the measured, slow-burning Wimbo Wa Wana and laid-back Chema Chajiuza, are addictive sonic exercises. The head-bobbing bass of Tenda Wema Dub would probably fill Angelo Badalamenti with jealousy, while the Caribbean bounce of Jipe Moyo just begs for some Dennis Alcapone toasting. It is as fascinating as it is chilled.” (XLR8R)

“Chisholm hails from an open landscape, and creates something that can sometimes sound like jazz, but it´s utterly free of American jazzbo specialization and dogma. And, like any good pop record, Healing the Music has its human center, a voice with passion and despair that scales the language barrier.” (Dusted)

THE EMBASSADORS is a music collective formed by HAYDEN CHISHOLM.

“Music like this comes about through long friendships and in our case we have been playing together for over a decade in different formations. The musicians are from New Zealand, South Africa, Peru, Kenya, and Germany – more than enough reason to go forth as THE EMBASSADORS…

…This year (07) while I was performing in Kenya I came across the multi-instrumentalist and vocalist MICHEL ONGARU who for me was the missing piece for the collective´s debut album on Nonplace. After jamming for a week solid we made plans to merge our musical minds and record “HEALING THE MUSIC“. Two months later we sat in Room 120 of the WAB hotel of Nairobi for days and nights on end, encircled by mosquitos and American evangelists. I wrote the words in English, Michel would put them into Swahili and churn them out at light speed on his Braille machine and Rob would fire up the tapes. The dots on the page were then brought to life by Michel`s voice, echoing through the burnt-out empty rooms of the third floor.” (H.Chisholm) 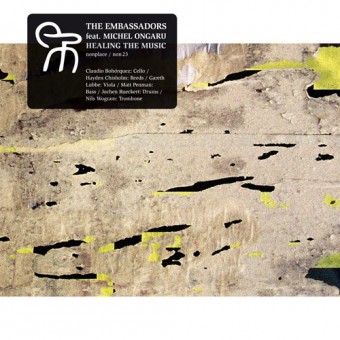