“Flanger’s debut Templates was trumpeted in these very pages ten years ago (1997, “It’s difficult to imagine a time when it won’t sound before it’s time”) and was regarded as a milestone for electronica, in that it took some well-worn jazz tropes and demolished them with an album full coruscating wit and playful invention. (…) Originally issued 1997 and 1999 on a Ninja Tune sub-label, the first two Flanger albums (Templates and Midnight Sound) have been edited down by Friedman to one album and renamed Nuclear Jazz, and outside of this rather inexplicable editorial interference, it’s still a remarkable listening experience, if rather alien for those looking for some ‘authentic’ heart-on-sleeve emotional release.” (Gary Steel, Real Groove, New Zealand 2007)

“Not only their wealth of ideas but also their ability to ‘humanize’ the sound of samples, coupled with the funkiness of their music, is evident on this album. With electrically defamiliarized instrument set ups, “Nuclear Jazz” ignores all the stylistic pigeon holes that critics so love squeezing musicians into. There seems to be nothing Flanger is reluctant to touch upon.” (liner notes)

All tracks were composed and produced 1996 and 1997 in Santiago De Chile by Atom TM and Burnt Friedman. 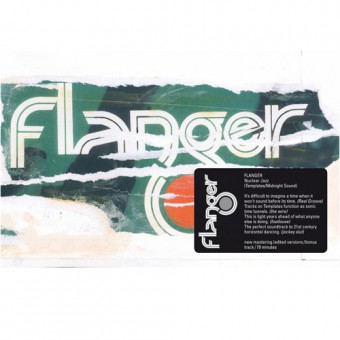