Over the past 12 years Secret Rhythms has become the leading Nonplace trademark. In April 2013 Jaki Liebezeit and Burnt Friedman will add a fifth album (CD/ 2×12″) to a series that also includes three 12” singles and one remix single. Central to the secret rhythms concept is Liebezeit’s radical drum code in unison with Friedman’s range of archaic metal percussion and synth instruments. The two musicians’ live and studio collaboration has led to eight striking new tracks which, at durations between 3 and 5 minutes, conform to standard expectations in length at least.

Jaki Liebezeit numbers among the world’s foremost drummers. Between 1968 and 1978, playing as a founding member of the legendary Can, he produced rhythms to be heard nowhere else, anticipating by many years the loops of modern club music. His delicate and peerlessly precise drum sound is audible in countless studio productions by a range of artists from Conny Plank to Jah Wobble. But by the early 1990s Liebezeit felt he had exhausted the possibilities of conventional drums. He made a radical break, and began to re-define, or re-invent, what drumming was about: “That explains why I’ve meanwhile abandoned conventional drums, the standard American kit. I looked around for something different, and now I just play drums. People keep saying my drumming is so reduced, but there’s nothing minimalist about the way I play, I just leave out the superfluous stuff.”

Simplicity became a core principle for Liebezeit and collaborators like the Cologne formation Drums Off Chaos, or the electronic musician Burnt Friedman, who is noted for his richly detailed, groove-heavy productions. Less is known about his activities in the period from 1978 up to the mid-1990s, when he began to make his own instruments and took up the drums, initially with no thought of electronic music. He was searching for a method that would allow him to play although he lacked any knowledge of music or what it was supposed to be. From the first note on he recorded all his ad hoc compositions, since these attempts were useful for the purposes of learning.

Allegedly the sound of one-armed bandits inspired Paul Desmond to compose “Take Five”: “It was the rhythm of the machine which influenced me, and I really only wrote the track to get the money back I lost that night.”
Although jazz offers examples of odd time signatures stretching back all the way to Lennie Tristano in 1955, for example, or Dave Brubeck and Paul Desmond in 1959, fundamental differences persist in the way these rhythms are perceived. Terms like downbeat and offbeat, polymeter or syncopation point to theoretical inconsistencies. They demonstrate that the notion of a uniform, dynamic functional principle is alien to western thinking.

Watching Liebezeit play his drums, or following the developmental path of the Secret Rhythms titles, it becomes possible to understand that the rhythmic formula is comprehended as being circular – in much the same way as in traditional or neo-traditional music in non-western spheres – as opposed to linear and progressive. The formula is derived from a recurrent, necessarily balanced body movement from which every impulse originates as something sensed as opposed to noted down. Once these basal motional patterns have been transposed to the memory of the body, they can be effortlessly transferred to any desired resonance box, string, drum, xylophone or piano. They are in tune to begin with.
This formulaic principle, which can be represented with just two signs, or translated into simple digits, can also be grasped as an energy structure according to which the individual (or an infinite number of individuals) is synchronized. Analogously, all the instruments played on Secret Rhythms 5 are synchronized to the principal motional formula. 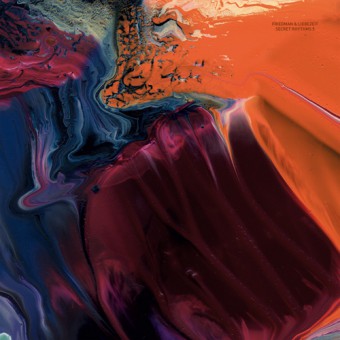 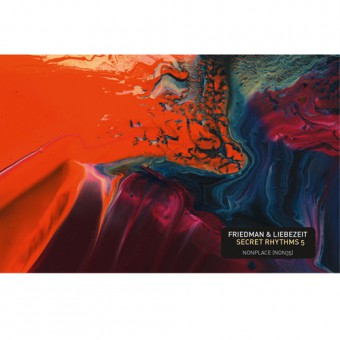