Over the years we have all witnessed the hype and blather, empty rhetoric and hollow promises of ‘supergroups’ of musicians and programmers assembled like a top shelf soccer team from the finest craftsmen money or ego can buy. Time is too short to recount the names on the scrapheap of failures that signposts the road to righteous rhythm ruling but with the album you have in your hands we can herald that rare treat, an unmitigated success. Though the five trusty deckhands that make up the Nu Dub Players are only household names to those whose investigations of the underground have permitted them a peep below skin deep, the arrival of all five of them via varying modes of transport on Great Barrier Island in January of 1996 caused immediate geo-thermal rumbles all around the musical world.

Crucial Guenther, the brain surgeon of boom and bass bandito from Berlin took the ferry across the Manakau harbour. His legendary fear of flying began on a stormy night in 1972 over the Bermuda Triangle when as bass roadie for a leading Jamaican band he unwittingly indulged in a ‘spiked’ serving of jerk chicken. For Guenther whose clean living regime only allowed him a conservative mug of egg nog on Christmas Day and maybe a sip of Red Stripe on his birthday the industrial strength acid that had been passed on to ****** **** **** (name removed by Nu Dub lawyer) by a pair of well known English rock stars (who thought they were American and at that time also wished to be Jamaican) was simply too much. As the spiked chicken took hold Guenther hallucinated wildly, apocalyptic visions of a treble tuned world with only the torturous hum of the aircraft’s twin engines to fill in the bottom end absorbed his munted mind. Upon his arrival at Norman Manley International airport in Kingston, Jamaica ‘Crushe’ had to be escorted off the plane in a state of distress swearing to never fly again and devote his life to ensuring that the horrific mind creations he had conjured up never became a reality. Since then he has only ever left the Treasured Isle upon receiving the word from Burnt Friedman and always by stowing away on the next cruise ship full of geriatric Americans and bored ship attendants. This time he was forced to join the crew of a deep sea trawler with a final destination of Port Chalmers (South Island, NZ) They soon discovered that Guenthers 24 year hiatus from the Western world left him in no disposition to be of any use to their mission beyond entertaining them with solid bass rhythms relentlessly throughout their two month journey.

DJ Booth fortunately is a man far more in control of a wide range of travel options and his arrival following a whistlestop tour of nightclubs in the troublespots of South East Asia. Renowned as the selector on a mission Booth first came to the notice of the Nu Dub Players while continuing a residency in Beiruits most bombed square mile. The first (and to our knowledge only) extreme DJ he has made his living and name by voluntarily placing himself and his decks and fx in the most dangerous and contentious locales on the globe. Club nights like ‘Kool Out In Kosovo’, his Bagdhad residency ‘Steady On Saddham’ and the peace brokering ‘Bloody Well Chill Out Belfast’ have seen the Booth nominated for a Nobel Peace Prize without even offering up much chance of a beatmix. His unfloundering belief that the warring factions of the world could learn a lot from a musically mixed DJ box and less genre-crunched-seamless-shite has won him admirers in many different shades of camouflage and khaki. Fidel Castro calls him ‘numero uno DJ por los masses’, and world leaders as well as armed up to the teeth revolutionaries have all filled the dancefloor and forgotten what they’re scrapping about to Booths dubwise and elsewhere textures. However his big break came when Burnt Friedman became aware of his phenomenal home made effects-in-a-suitcase-rig and uncanny ability for a nifty run up and down the ivories. Despite the avowed a-politicism of the Nu Dub Players (perhaps excepting ‘Crushes’ ongoing aversion and obsession to his paranoid un Eqd world vision and major airlines of the world) Booth was humbled by the offer of linking up with the nouveau dub Dons and remains to this day a vital cog in the machinery of this impromptu and experimental outfit.

Bernie the Bolt the Golden Shot of drums’n’perc in the Nu Dub line-up remains something of an enigma. Of the little that is known of him it has been revealed that he is a close friend, confidante and perhaps even an influence on band leader Burnt. On the few occasions he has been photographed he has always been immaculately attired usually in blazer with a cravat, smart but casual slacks, diamond socks and ting. Aside form his snappy dressing we do know that the Bolt generally conducts his bateria business from a secret base in South America. His community works have made him a local hero and his drum camps for the rhythmically challenged have been lauded from the pueblos and jungle townships through to the big cities on the coast. The few recordings of Bernies blinding bateria skills that have made it out of South America have become collectors items with even bootleg cassettes going for hundreds of dollars. When this superintendent of the skins released a press statement through his mysterious attorney Jose Muypeligroso in the early 90s that he had digitised his jungle clearing and the bongos were going to be snuggling up to Cubase in the rhythm hammock the drum world was aghast. Now through the wonders of technology and the near perfect acoustics of the Great Barrier Sound Dome (especially constructed for this project …see details) the whole world will at last be able to hear the organic technologique innovations of this prince of percussion.

If Bernie the Bolt is an enigma then the Cousin Of The Sausage Smearer is but a blip. There are rumours of his association with the US space program and even counter-subversive backward masking guitar tracks for the CIA during the Cold War but not even a name is known of this guitar jangling fellow whose whole life was shrouded in darkness. Few can really know the dehabilitating dimensions that ones life takes on when you are only known as the spare wheel, a gooseberry if you will on the plate of a famous partner. Imagine then if this famous partner was only remembered for one bizzare, surreal, butcher-related meat spreading incident and never even known by the name given to him by his similarly food frenzied father and mother. Imagine yet still further that you were not even the spare wheel, nor even a partner of the famous but merely a cousin.There you have the despair andtragedy of the C.O.S.S. Once again at the bidding of the Nu Dub lawyer I’m not permitted to reveal any of the details of the sausage smearing affair and it’s subsequent effect relating to Car Hire Legislation in New Zealand but the repercussions continue to this day. When more information was requested from Jose Muypelligrosso on the C.O.S.S. for these sleevenotes a fax was received stating ‘In loving memory of the Cousin Of the Sausage Smearer who was taken away from us so tragically on the morning of August 20th 19**. We will always love you and miss you.’ What more can be said of a man who was a cousin of someone who did something we can’t tell you about? We think it’s best left to muse on his axe spanking on ‘Cassock Attack’.

Programmer, producer and enginerrtician Burnt Friedman is the mucousy substance that holds the highly creative and temperamental strands of the Nu Dub Players together. Following an intense course of mud related activity in Rotavegas Friedman arrived fully charged for the N.D.P’s latest experiments in stereophonic stupor. Having made his name as conductor for top pop combos Drome, Nonplace Urban Field, SMC and Flanger one could imagine that this project with the intense demands of the individual members could be a trying one for the Kolonic cut crusader. However it is within the dub soaked melange of misappropriated mischief and endless echo that the smouldering one is most at home. Reining in the individual skills of each of his semi-psychotic sidekicks and channelling them through the mixing desk Burnt ensures that the Nu Dubs highly skilled musical mutterings don’t turn out as a pile of muso wank. It is also Friedman that recovered the original master tapes and lovingly restored them after Crucial Guenthers insistence on not allowing them to be flown back to Auckland in an aeroplane. 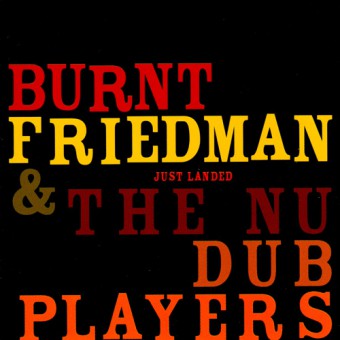